Immunogold labeling is an unequaled technique used for the identification, localization, and distribution of proteins, antigens, and other macromolecules of interest, at an ultrastructural level. 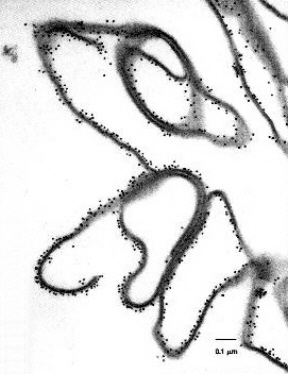 Immunogold labeling is similar to conventional immunofluorescence techniques, generally used for light microscopy. However, immunogold electron microscopy provides investigators with an added dimension over the usual fluorescence assays, as the localization and distribution of macromolecules can be clearly observed at an ultrastructural level, at high magnifications, with high resolution. In addition, macromolecule localization and distribution can be recorded using specialized photography.

There are three different techniques normally used for immunogold labeling, dependent on the type of sample submitted and the location of the protein or macromolecule of interest.

Post-Embedding Labeling techniques are used exclusively for the detection of proteins, antigens, and other macromolecules of interest that are located in the interior or intracellular regions of cells, virus particles, and other extracellular biological specimens.

Negative Stain Immunogold Labeling techniques are used to detect the presence or absence of proteins, antigens, and other macromolecules, on the surface and/or the interior of biological specimens in suspension.

This email address is being protected from spambots. You need JavaScript enabled to view it.